The technique of discovering vulnerabilities in a software, website, or agency’s structure that a hacker might exploit is known as ethical hacking. They employ this method to avoid cyberattacks and security breaches by legitimately hacking into systems and looking for flaws. CEH was designed to include a hands-on environment and a logical procedure across each ethical hacking area and technique. This is to provide you the opportunity to work towards proving the knowledge and skills to earn the CEH certificate and perform the tasks of an ethical hacker. 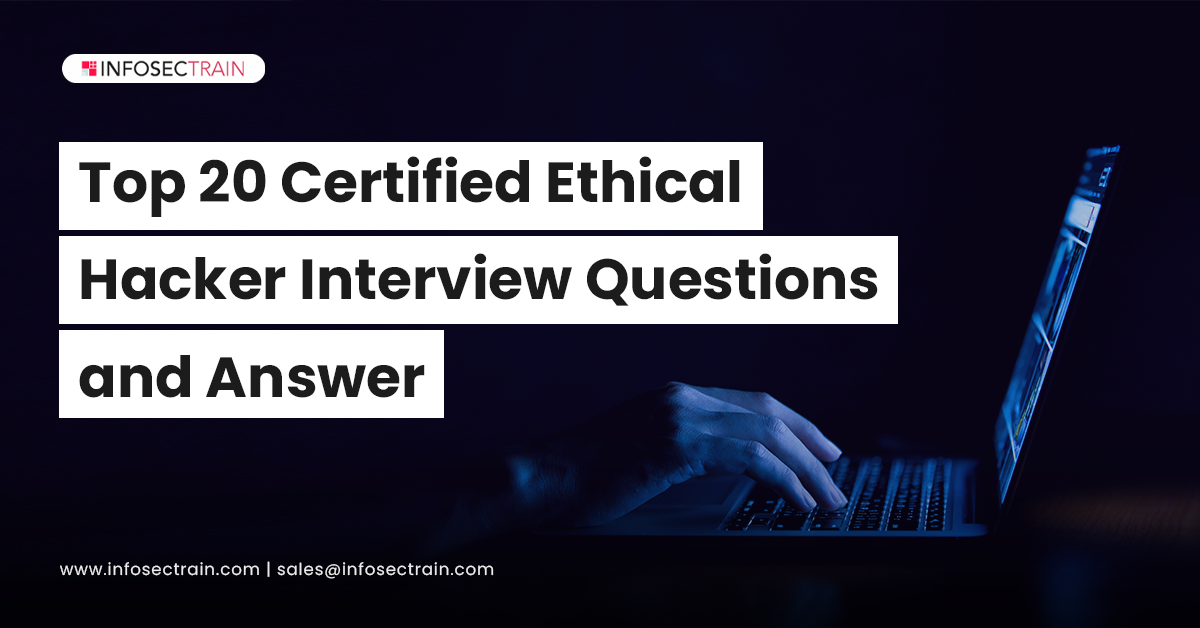 Interview Questions
1. Describe hacking?
Hacking is the act of gaining access to a system or network without authorization. A hacker is someone who engages in this activity. They use computers for malevolent purposes such as invasion of privacy, theft of corporate and individual data, and more.

2. Explain ethical hacking?
When someone performs penetration testing or intrusion testing on behalf of the owner of a software system, program, network, or other computing resources, they are considered to be ethical hackers because they are looking for loopholes and vulnerabilities that a malevolent hacker could use.

Black Hat: The black hat hackers are responsible for creating malware. They obtain unauthorized access to data or network, causing it to be damaged and stealing critical data.

White Hat: These are known as ethical hackers. They are widely used by organizations or government bodies to identify weaknesses.

Grey Hat: The grey hat hacker is the combination of both black and white hats, they find the weakness of the network or device without the permission or knowledge of the owner. Their objective is to bring the system’s vulnerabilities to the customer’s attention and seek compensation or an enticement from the owner.

Besides these well-known hackers, there are a variety of hackers based on what they hack and how they hack:

Hacktivist: A person who uses technology to spread social, religious, or political messages. Website defacement or Denial-of-Service assaults are common examples of hacktivism.

Script Kiddie: The person who accesses a computer system using automation tools written by others and has little understanding of the fundamental concept, known as Script Kiddie.

Elite Hackers: This is a term used among hackers to describe the most proficient hackers.

Neophyte: They’re also known as green hat hackers or beginner hackers because they have no prior experience with technology or hacking.

Blue Hat: Those who are not affiliated with computer security consulting firms seek to do a bug test on a system before its release to identify flaws and plug gaps.

Red Hat:  They are a hybrid of both white hat and black hat hackers, and are typically engaged by top intelligence services, government entities, and other firms that handle sensitive data.

4. Explain different types of hacking?
Hacking is classified into the following types, based on the category of being hacked:

7.What is the distinction between hashing and encryption?

8. What exactly do you understand when you say “keystroke logging”?
Keystroke logging (sometimes called keylogging or keyboard capturing) is a technique for recording keystrokes. It’s a form of monitoring software that records every input on the keyboard. Every keystroke is recorded, and data is accessed by using the logging program.

9. What exactly do you mean by Trojan and how do you classify them?
A Trojan is a sort of malware that is frequently created by hackers or attackers to obtain access to target computers. Users are tricked by some appealing social media advertisements and then led to fake links, where Trojans are loaded and run on their devices.

Trojan downloader: It is a virus that downloads and installs other viruses.

Ransomware: This type of malware encrypts the data on your device/system.

Trojan-backdoor: It is the most common sort of Trojan, and it builds a backdoor that allows attackers to gain access to the machine, later from a remote location using a Remote Access Tool (RAT). This Trojan gives you complete control over your computer.

10. What exactly do you mean by “exploitation”?
Exploitation is a feature of pre-programmed software or scripts that enable attackers to obtain control of the specified system/network and attack its vulnerabilities. To detect these vulnerabilities, most hackers utilize scanners such as OpenVAS, Nessus, and others.

11. What exactly is enumeration in the context of ethical hacking?
The first phase of ethical hacking is enumeration, which is information collection. During this phase, the attacker establishes an active connection with the target and attempts to gather as much data as possible to identify system vulnerabilities or weaknesses and further take advantage of the system. Enumeration gathers information on the following topics:

12. Describe MIB?
The Management Information Base (MIB) is a collection of network components that are accessed remotely. It comprises all of the technical specifications of the network objects that a network management system is observing. The MIB database object serves as a point of reference for a comprehensive set of management data on a network system.

13. What is footprinting?
Footprinting is a methodology for gathering as much information about the specified infrastructure as possible in order to carry out a successful cyber operation. It also determines the user’s defense capabilities. A hacker can gather information about a domain name, IP address, namespace, employee information, contact information, mails, and employee data during this period. It is divided into two parts:

Active footprinting: It collects data by direct contact through the target network.

Passive footprinting: It gathers data from a target network that is located far away from the attacker.

14. What exactly is DNS(Domain Name System) Cache Poisoning?
DNS cache poisoning is a method of diverting internet traffic away from real servers and towards misleading ones by exploiting DNS flaws. DNS spoofing is another term for it.

15. What exactly is a DDoS assault, and how does it perform?
Distributed Denial of Service(DDoS) is a type of attack, where numerous affected systems are frequently infected with a virus and leveraged to target a single system, resulting in a DoS (Denial of Service) attack.

It is an attempt to keep a webpage or online service unavailable by flooding it with massive amounts of traffic from several sources.

16. What exactly is a phishing attack?
Phishing is a process or an attempt to get sensitive information such as user data, credit card numbers, and so on. These attacks usually happen while using personal emails or social media sites, as well as online purchases and other services.

18. Explain a rogue DHCP server?
It is a DHCP server that is installed on a network or system by an attacker, which did not come under the supervision of system/network administrators. It could be a modem or router.

19. Describe ARP poisoning?
It is also known as ARP routing or ARP spoofing. It is a method of attack where attackers change the MAC(Media Access Control) address and target the ethernet LAN network by modifying the target computer’s ARP cache with faked requests and reply packets.

20. What do you mean by fingerprinting?
Fingerprinting is a method to determine which operating system is installed on a remote device.

The CEH exam is challenging, and that is its glory. InfosecTrain provides premium training for those who wish to advance their career in the IT Field. InfosecTrain’s trainers are extremely well-versed in a wide range of fields. We’re a world-class training company with a global reputation for excellence in training. Enroll in InfosecTrain’s CEH certification training courses to begin your preparations. 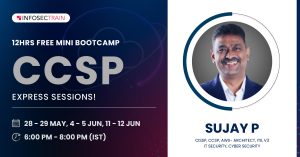