The Top Skills to become a Cybercrime Investigator

In this digital era, our lives are entirely dependent on the internet. From saving our data to money transactions, there is almost nothing we can do these days without the internet. This growing involvement in the cyber world is causing many cybercrimes. 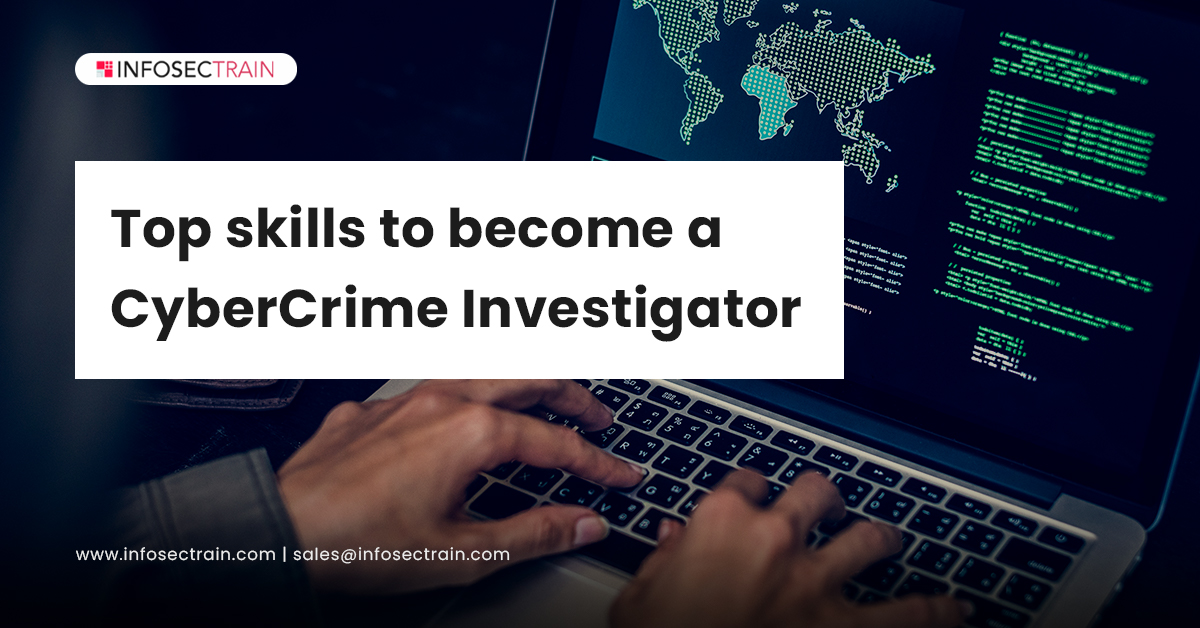 It is no exaggeration to say there has been exceptional growth in cybercrime in recent years. Cybercriminals, or hackers, are using the internet as a barrier to getting a target user’s sensitive and personal information. As cybercrimes raise, organizations are also willing to expand their security teams and hire many Cybercrime Investigators. So, in this blog, we will go over the top skills needed to become a cybercrime investigator.

Cybercrime mainly involves the internet or computer for financial gains, like identity theft, internet scams, cyber espionage, ransomware, and credit card fraud. The major causes of this cybercrime include:

Operating systems are what make computers work, and they are made up of millions of lines of code. Because humans write operating system codes, they are susceptible to errors. Though the tiniest loophole in the code may not significantly change the operating system’s functioning, cyber-criminals can simply exploit these flaws.

Protecting a system against data breaches involving complicated technology is often difficult or impossible. The system’s security can only be compromised if hackers have easy access to it. Competent hackers can get unauthorized access by compromising access codes, retina scans, voice recognition, and other methods. They can simply spoof the biometric system and get past the system’s firewall.

Anything we overlook or dismiss as insignificant can quickly escalate into a significant problem. The same principles apply to cybercrime. Ignoring to ensure the security of your system can result in substantial issues. A little sloppiness on your part can open the door to cybercriminals. As a result, it’s critical to keep an eye on what’s going on, on your computer.

They usually have extensive knowledge of the internet, computers, networks, and softwares. They use this information to gather evidence and, in the end, to figure out how cybercrime was committed.

Large corporations may also hire Cybercrime Investigators to test their existing security systems. To do this, investigators hack into the corporation’s computer networks using several methods.

The various job responsibilities of a Cybercrime Investigator include:

The skills required to become a Cybercrime Investigator

Organizations demand a few specific skill set depending on your investigations, but here are some of the most commonly expected skills from a Cybercrime Investigator.

To investigate cybercrime, you don’t need to be a cybersecurity specialist, but you do need to grasp the essentials. Exploiting security flaws is a common method of cybercrime, and it’s crucial to understand how this is done. You’ll also need to be able to spot harmful malware in action.

Cybercriminals use a variety of devices and operating systems to commit their crimes. Investigators must be familiar with all common devices and have the ability to grasp new technology swiftly.

To investigate cybercrime, it’s crucial to know the laws under which perpetrators may be penalized. Investigators are also prohibited from breaking some laws, such as the criminal’s right to privacy.

An expert in finding information online is required of a Cybercrime Investigator. It’s not just about using search engines here, a criminal investigator should know where to check and how to make the procedure more efficient.

Hackers are often the perpetrators of the most sophisticated cybercrimes. If you want to look into this area of cybercrime, you’ll need skills in ethical hacking or penetration testing. Many jobs, such as fraud investigation, do not demand this skill.

Experience on the dark web

The dark web is often the destination of stolen information when a cybercrime involves theft. Dark web forums are frequented by most professional cybercriminals, and experience with this aspect of the internet is typically required for successful research. If you want to know more about the Dark Web, you can follow our blog:

Mysteries of the Dark Web

The role of the Investigator can be highly rewarding if you are interested in how cybercrime happens. There are many benefits and challenges to this kind of work, including the chance to make the internet a much safer place. Getting into this field is certainly not easy, and it could take you many years to enter this field, depending on your level of expertise. If you are determined to enter this field, check out InfosecTrain for the Cybersecurity courses.