Ethical hacking is an exciting career opportunity for individuals with excellent problem-solving skills and a passion for information security. Ethical hackers are responsible for safeguarding the critical infrastructure of the organization. They organize penetration tests to identify the vulnerabilities and help the organization take necessary measures to prevent possible cyber-attacks. There has been an increased demand for Ethical hackers in government agencies ( military and intelligence agencies) and private organizations in recent times. To become an ethical hacker requires a sound knowledge of networking and hacking systems. 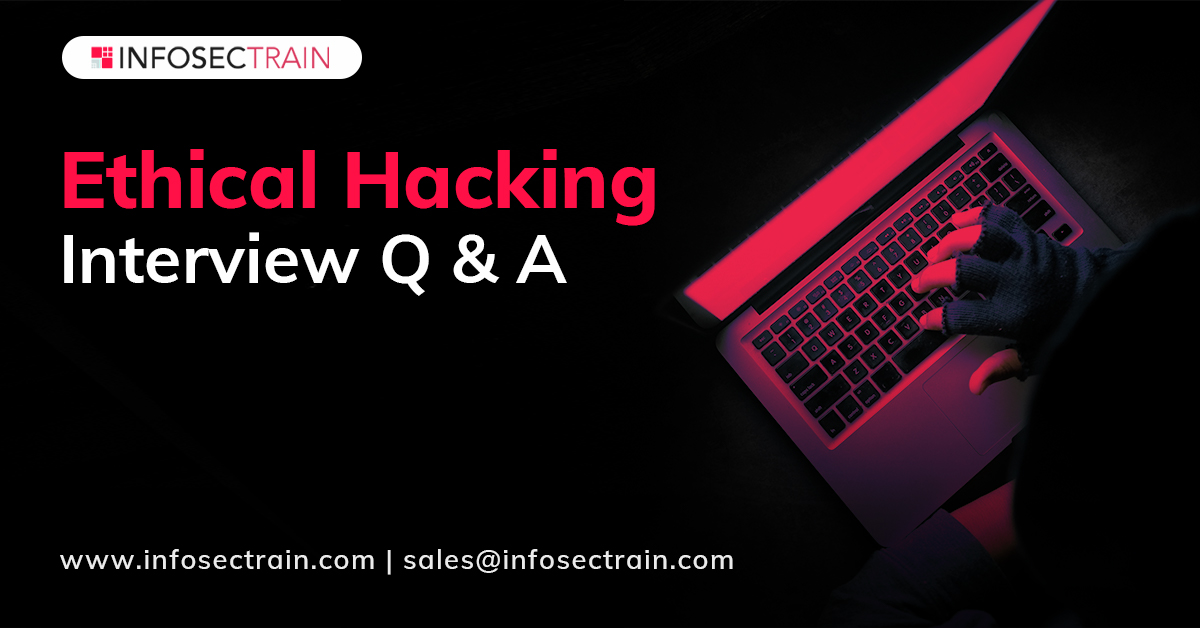 This section outlines some of the frequently asked questions in an Ethical hacking job interview.

Question1: What cybersecurity news sources do you prefer to keep yourself updated?
Answer: An ethical hacker needs to stay updated about the latest vulnerabilities, exploits, and attacks. Social media handles such as Twitter can be the quickest way to get information. You can also mention Google alert, Reddit, tech news sites, and channels on slack or discord communication platforms.

Question2: How would you conduct an external penetration test?
Answer: This question is often asked in the interview to test your methodology and approach to conducting a penetration test. The interviewers can shoot this question providing specific scenarios and parameters. Sometimes, they will deliberately skip the details. So don’t restrain yourself from asking for additional information.

Question6: What is a Phishing attack?
Answer: Phishing is a type of social engineering attack in which Attackers create an urgency using threats, financial incentives, and impersonation of an authoritative organization to prompt a user to give their sensitive information, including the credit card details, usernames, and passwords.

Question7: What is a sniffing attack?
Answer: Sniffing refers to monitoring and analyzing incoming and outgoing data packets over a network. Packet sniffers are used to capturing the data packets. Motives behind sniffing attacks are stealing bank account information, getting usernames and passwords, and identity theft.

The best method to detect Blind SQLi is Time based detection. Databases including MySQL, MS-SQL use a function for delays. The attacker inserts the sleep() function in a query. The slower response from the database would mean the query got executed successfully, and Blind SQLi vulnerability is present on the web page.

Question9: What do you understand by the DDoS attack? What are its types?
Answer: The Distributed Denial of Services (DDOS) is an attack in which an attacker floods a network, server, or website with useless traffic so that it becomes inoperable for the intended user. The traffic may contain incoming requests for connection or fake data packets. There are three types of DDOS attacks.

Question10: What is an SQL injection attack?
Answer: SQL injection is a method to hack a web application. In this method, the attacker executes malicious SQL statements to take control of the database server. Attackers use SQL vulnerabilities to retrieve or modify the data of the SQL database.

The following are the types of SQL injections:

Question12: what is cow patty?
Answer: Cowpatty is a tool that can implement an offline dictionary-based attack on the WPA/WPA2 networks that are using PSK- based authentication.

Question13: What is a keylogger?
Answer: keylogger is a surveillance technology used by an attacker on a target computer to record and monitor keystrokes struck by the user. Keyloggers record the sensitive information typed by the target.

Question14: What is spoofing?
Answer: Spoofing is a scam in which an attacker impersonates a legitimate source or known contact of the target to obtain sensitive information. Hackers can use this information for illegal activities such as identity theft.

Following are some of the renowned spoofing attacks:

Question15: What is DNS cache poisoning?
Answer: DNS cache poisoning is also known as DNS Spoofing. It is an attack in which an attacker takes advantage of the vulnerabilities existing in the DNS (Domain name system) to divert the traffic from the original server to a fake one.

The questions and answers mentioned above will help you prepare for your job interview. There are other questions related to cybersecurity that you may face in the interview.

It is recommended to upgrade your existing knowledge and skills with cybersecurity certifications. Infosec Train offers a comprehensive training program for the CEH (Certified Ethical Hacker) certification that will help you to forge a promising career in the field of Ethical hacking.

AUTHOR
Shubham Bhatt ( )
“ Shubham Bhatt holds a bachelor's degree in computer science & engineering. He is passionate about information security and has been writing on it for the past three years. Currently, he is working as a Content Writer & Editor at Infosec Train. “ 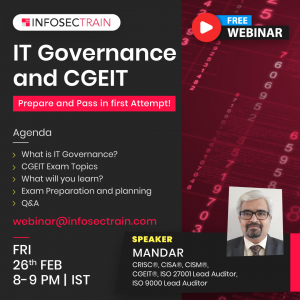