The field of cryptography is an old one and dates back to 2000 B.C. in Egypt.  Let us have a brief look at the basic working of cryptography before moving onto the different types of attacks: 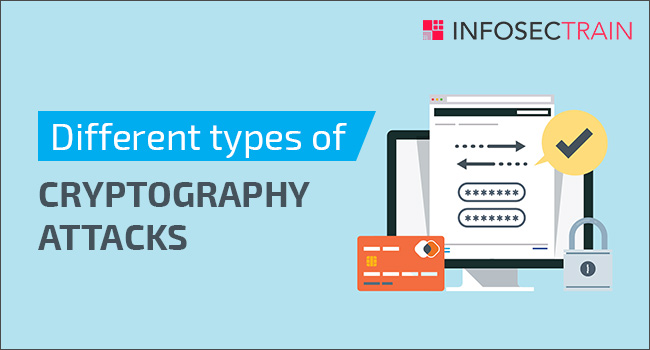 In ‘Symmetric encryption’ algorithms, the same key which is used to encrypt is used to decrypt a message.

In ‘Asymmetric encryption’ algorithms, different keys are used to encrypt and decrypt a message.

These are some examples of ‘active attacks’:

In the ‘cipher-only’ attack, the attacker knows the ciphertext of various messages which have been encrypted using the same encryption algorithm. The attacker’s challenge is to figure the ‘key’ which can then be used to decrypt all messages.

The ‘cipher-only’ attack is probably one of the easiest attacks to commit since it is easy to capture the ciphertext (by sniffing) but difficult to implement since the knowledge about the encryption process is limited.

In the ‘known-plaintext’ attack, the attacker knows some of the plaintext and the ciphertext. He then has to figure the ‘key’ by reverse engineering and he can decipher other messages which use the same ‘key’ and algorithm.

The ‘known-plaintext’ attack was effective against simple ciphers such as the ‘substitution cipher’. It was popular for breaking ciphers used during the Second World War.

The ‘chosen-plaintext’ attack is similar to the ‘known-plaintext’ attack, but here the attacker experiments by choosing his own plaintext (say choosing a word such as ‘cryptography’) for a ‘Vignere cipher’ and with the generated ciphertext he can figure the ‘key’.

Once he figures the ‘key’ he can learn more about the whole encryption process and understand how the ‘key’ is being used.

With this information, he can decrypt other messages.

This is relatively a harder type of attack and earlier versions of RSA were subject to these types of attacks.

This was a popular type of attack against block algorithms such as DES in 1990. The primary aim of this attack, as with other attacks, is finding the ‘key’.

The attacker follows several messages of plaintext into their transformed ciphertext. He observes the changes form plaintext to the ciphertext and deduces the key.

This is a type of ‘chosen-plaintext’ attack since the attacker chooses the plaintext to observe the transformation.

The attacker carries out a “known-plaintext” attack against several messages which have been encrypted with the same key. This gives the attacker insight into the probability of a particular key. If more messages are attacked, there is a higher possibility of finding the particular “key”.

Apart from just relying on mathematical ways to break into systems, attackers may use other techniques such as observing power consumption, radiation emissions and time for data processing. With this data, the attacker works in a reverse manner to figure the ‘keys’ to an algorithm just by observing the amount of heat released in an attack.

RSA keys in 1995 were uncovered using this type of attack.

Timestamps are one of the important countermeasures to handle ‘replay attacks’.