CCNA is an associate-level certification that validates your skills to fix, configure and troubleshoot enterprise network issues. The accreditation is hosted by Cisco, a prominent vendor of network equipment that holds the market’s largest share. Many big enterprises use Cisco’s equipment in their network infrastructure. Therefore, CCNA certification can be instrumental in getting job opportunities in the IT sector as a networking professional. As a certified networking expert, you may find opportunities for the Network Support Engineer, Technical Support Engineer, Network and System Administrator, Hardware and Networking Engineer, etc. If you are looking ahead to preparing for the CCNA Interview, then you are at an accurate place. 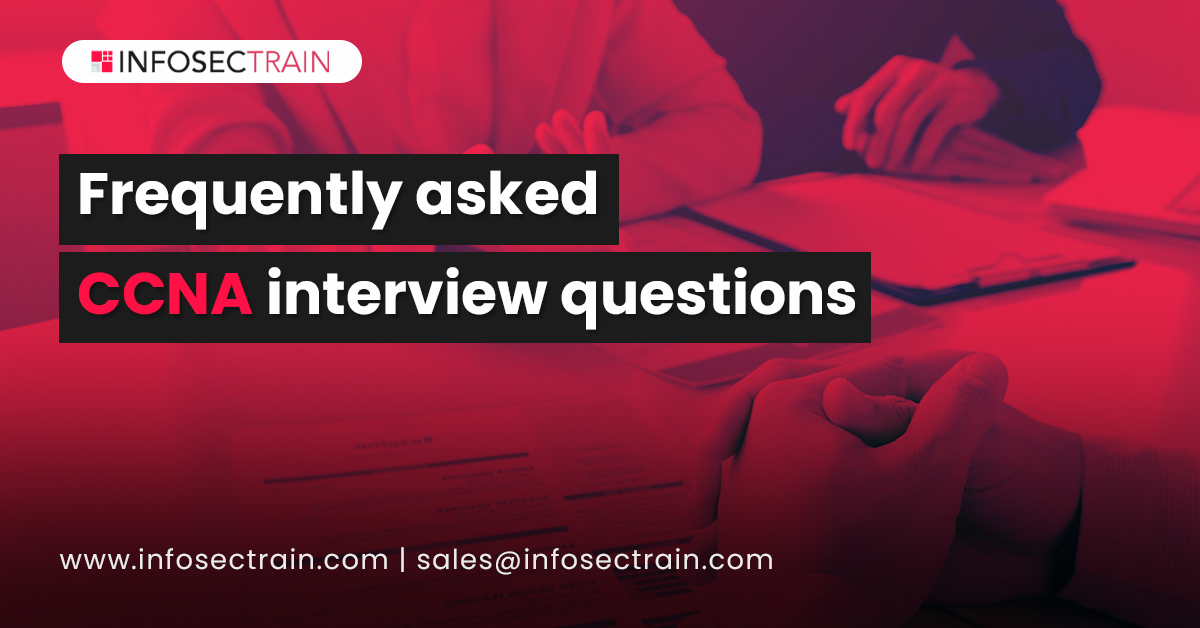 Here are the 20 most common CCNA Interview Questions and Answers that may help you crack your interview & earn your dream career in the networking field:

1) What do you understand by the OSI model in networking?
Answer: OSI model stands for open systems interconnection model. It is a reference model that shows how applications communicate in a network. It consists of 7 layers.

2) What is RIP?
Answer:  RIP stands for Routing Information Protocol and is also known as Interior Gateway Protocol (IGP). It is a distance-vector protocol that uses hop count as a routing metric to find the most suitable path between the sender and the receiver.

3) What is the difference between a collision domain and a broadcast domain?
Answer: Collision domain:  If two devices try to send data simultaneously, a collision will occur leading them to wait and re-transmit the data. So, when two devices in a network send information the collision domain has to take care of all the devices connected in the network whether it is destined for them or not. It happens only in the case of a half-duplex mode.

4) What are Half-duplex and Full-duplex transmission modes?
Answer: Half-duplex: In a point-to-point system, two devices are connected using a network cable, and these devices can communicate with each other in both directions but only in one direction at a time.

Full-duplex: In a point-to-point system, two devices are connected using a network cable, and these devices can apprise with each other in both directions at the same time.

5) Explain the public vs. private IP addressing.
Answer: Public IP is the IP address that can be accessed over the Internet like a web server or an email server. The public IP address on your computer allows you to secure your own server such as VPN, FTP, WEB, etc. With the help of public IP, you can set up any home server to publish it on the Internet.

The private IP address of a system is the IP address that is used to communicate within the same network. Private IPs are not loaded on the Internet, and no data cannot be sent to them from the Internet; it only works within the local network.

6) What is the difference between Unicast, Multicast, Broadcast, and Anycast?
Answer: In a unicast transmission, a single data packet is sent from the source to a single destination on the network.

In broadcast, a single data packet is sent to all destinations on the network.

Multicast is like broadcast but, in multicast, you have to be a member of the multicast group.

In anycast, the data is sent to the nearest node within the network and that node then initiates another anycast to its nearest node.

7) How are straight-through and crossover cables different from each other?
Ans: Straight-through: You can use it when you want to connect two different types of devices. It is the most commonly used cable format for network cables. It helps to connect a router’s WAN port to a LAN port.

10) What are Data Encapsulation and De-Encapsulation?
Answer: When data is sent, each layer adds some extra information like protocol information, IP addresses, MAC addresses for the data to reach its destination. It is called Encapsulation.

When data is received, each layer will shred the information attached in the header and trailer from the encapsulated frame it is called De-Encapsulation.

13) What are Static routing and Dynamic routing?
Answer:  Static routing: Static Routing is a user-defined routing technique. In this manual selection of a network, routes are managed by the network administrator and ideal for small networks. It does not use complex routing algorithms and is more secure than Dynamic routing.

Dynamic routing: Dynamic routing is a networking mechanism that enables routers to select paths using routing protocols and routes are updated according to the changes in the network. It is ideal for large networks. It uses complex routing algorithms and it does not provide high security like static routing

14) Differentiate Domain and workgroup.
Ans: Domains have one or more computers that act as servers. It has centralized databases. Domain computers can be on different LANs.

The workgroup consists of computers that are peers. In a workgroup, each computer has its own database and is on the same LAN.

15) What is Kerberos protocol?
Ans: Kerberos is a network authentication protocol that is based on time-sensitive ticket-granting-system designed to produce strong authentication for client or server applications using symmetric key cryptography.

16) What is DHCP in networking?
Answer: Dynamic Host Configuration Protocol (DHCP) is a network protocol that is used on IP networks where a DHCP server provides and assigns IP addresses to client devices. DHCP also assigns the subnet mask, default gateway address, and the Domain Name Server (DNS) address.

17) What is the Domain Name System (DNS)?
Answer: DNS is a database that stores domain names and their respective IP addresses for a specific top-level domain (TLD)  such as .com and .net. It finds the computer systems and assets on the web.

18) What is HSRP?
Answer: HSRP stands for the Hot Standby Router Protocol developed by Cisco to provide gateway-level redundancy without any additional configuration. All the routers in an HSRP group distribute a single MAC address and IP address that works as a default gateway to the local network.